“It is, for instance, easily possible to make a subjective white, as by a mixture of monochromatic yellow and blue light. A white surface under this would look as it does under ‘daylight’ but hardly a single other color would.” -- H. E. Ives

An illustration from that article can be marked up to illustrate what he meant. From Isaac Newton's color article, we may take the idea that most white lights contain all colors of the spectrum. Ives applied a more detailed understanding, perhaps from Maxwell and from his father Frederic Ives, that a mixture of two narrow bands, yellow and blue, will be perceived as white. Below is Fig. 1a from that article.

The black lines are Ives’s original drawing, while the orange and blue are added to represent his “mixture of monochromatic yellow and blue light.” Color vision is trichromatic, but monochromatic yellow stimulates two receptor systems because of the large overlap of the red and green sensitivities.

The 1965 "Color Rendering Index" ignored the overlap of receptor sensitivities and the issue of the two-bands light. The current CRI still ignores the issue.


The normal process of seeing is effortless. Talking about it is harder.


Thornton began by asking “Which wavelengths act strongly in mixtures?”

Later he realized that the basic color mixing experiment measures “action in mixtures.”

Strongly acting wavelengths are not a weird new idea. They are an old idea that was never put into words.

In the past—since 1980—I had used opponent color algebra. In 2003, I discovered that a set of Orthonormal Opponent Color Matching Functions is closely related to Cohen's Matrix R, fundamental metamers, and the vector diagrams that he made. 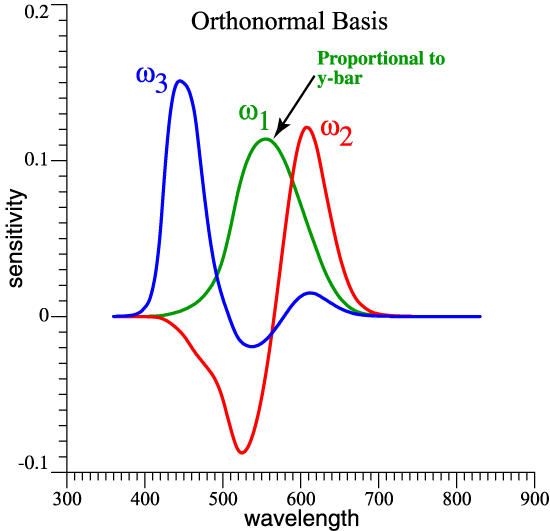 The functions are easy to generate, or can be found at
http://www.jimworthey.com/orthobasis.txt  .
I first generated them by applying Gram-Schmidt orthonormalization to Guth's 1980 functions. 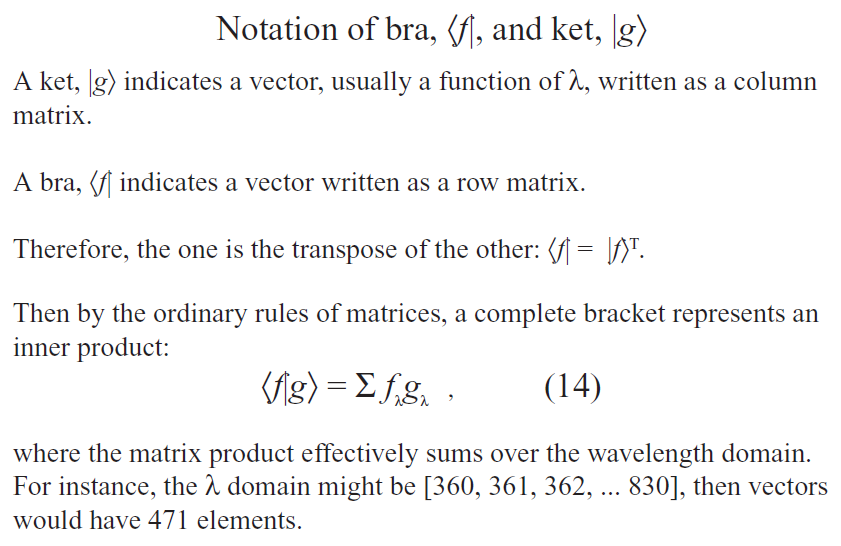 Orthonormality, Eq. (13), can be expressed in matrix form:

If you multiply Ω and its transpose in the reverse order, you get a different interesting result:

My numbers and graphs are based on the 2º observer. If a different standard observer were used, details could change, but certain basic ideas would not change:

If vectorial color is forgotten and then re-invented in 50 years, these ideas will come out the same. They transcend the personalities of those who discovered them.


Vectorial Color Is About Color Mixing.
It Is Not About Any Neural Processing, Only Transduction.

Cohen’s ideas relate to making best use of color mixing data. The orthonormal CMFs are a convenient way to map stimuli into the invariant color space. They are not a hypothesis about retinal wiring.

We have also seen that "mere" color mixing—the linear stage of vision—is the key to understanding color rendering and color camera sensors.